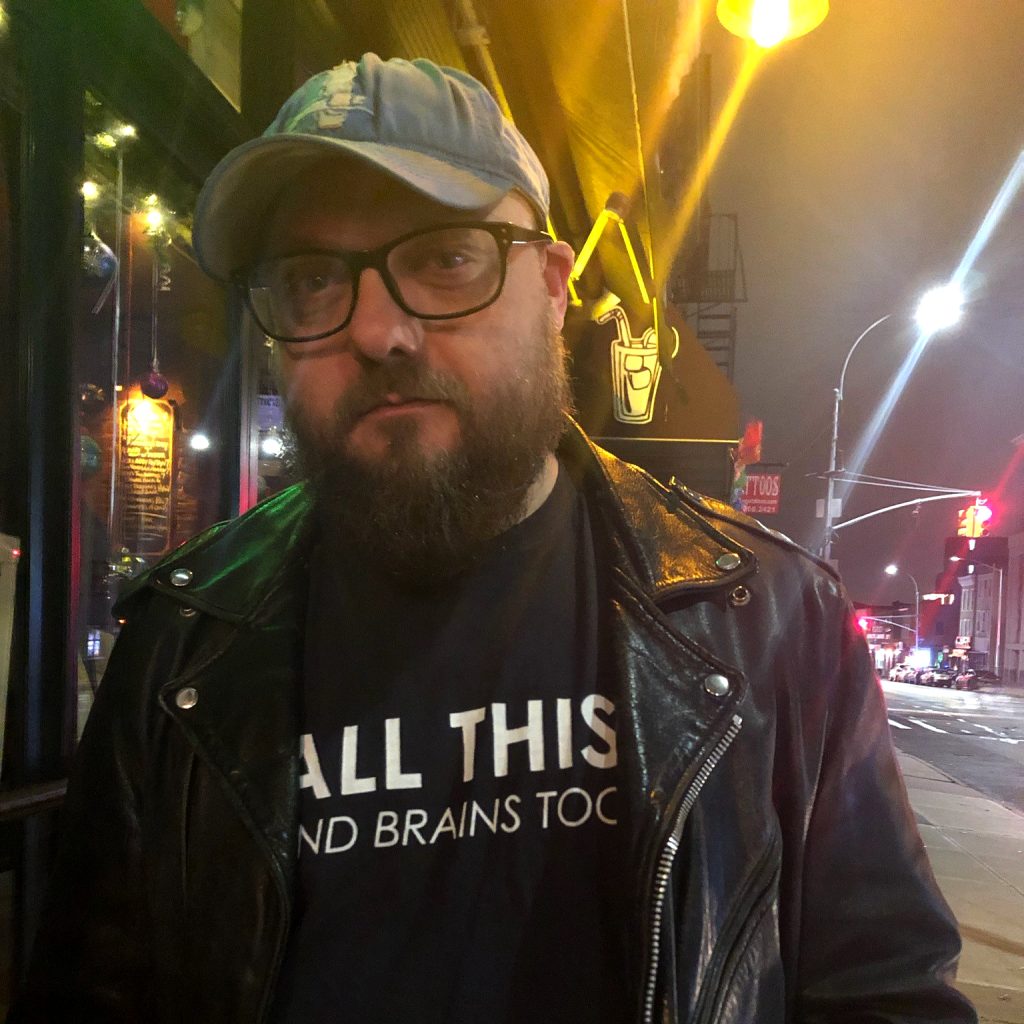 “One wonders—without caring too much—whether he’s just working out his own issues.”

Hello. My name is Leon Chase. I grew up in the industrial suburbs south of Detroit. Now I live in Brooklyn, New York.

I have self-produced two feature documentaries. The first, Fancy Feast: The Fat Burlesque Performer, screened at Anthology Film Archives in Manhattan, the Center for Sex and Culture in San Francisco, and the 2017 Coney Island Film Festival. The second, Suzy Hotrod: Roller Derby Star, appeared at Berlin’s Too Drunk to Watch festival, and at the 2019 Art of Brooklyn Film Festival, where it won the Audience Choice Award.

I’m currently at work on my third documentary, about a recently deceased Brooklyn dive bar called Hank’s Saloon. You can watch the teaser for it here.

As a professional Video Editor, I’m very proud to be working on Seayoon Jeong’s new feature film Nyctophobia. I also did initial editing on the much-anticipated Lola RocknRolla documentary The Big Johnson, all about iconic drag/gender/performance pioneer Dean Johnson. And I had the pleasure of serving as Assistant Director on Cory McAbee’s Deep Astronomy and the Romantic Sciences, which premiered in the fall of 2022 and is currently in the festival circuit.

Some other movies I’ve directed: the sexploitation parody The Pill Girls, the comedic Film Noir Upper West Side Story (official selection at the 2016 New York Short Film Festival), and Distant—a 2-minute horror short starring my wife, Ashlie Atkinson, which was created for Roger Corman’s Quarantine Film Festival and went on to be featured in the 2020 Coney Island Film Festival.

You can see more of my editing work, including trailers and music videos, here.

Once upon a time, I wrote a play called The Last Carburetor, which enjoyed two Off-Off-Broadway runs in New York City, and was subsequently published in Plays and Playwrights 2003 and The Best Women’s Stage Monologues of 2002.

I sometimes write for the underground film ‘zine Cashiers du Cinemart, which featured me in its anthology, Impossibly Funky: A Cashiers du Cinemart Collection. I have also appeared as a guest commentator on the film-nerd podcast The Projection Booth, as well as Australia’s See/Hear Music Film Podcast.

For nearly a decade, I fronted the cowpunk band Uncle Leon and the Alibis. I directed the music video for our song “Wild Ways” and orchestrated the guerrilla video project “Beer Train”—performed live on a New York City subway car—for the 2013 Couch by Couchwest Festival, where it won Most Creative Location.

Inspired by the Black Lives Matter movement, I have also done pro bono video work for political and minority-run organizations, including the historic Highlander Center for Education and Culture and the One Scene Cohort Collective.

If you need an editor, a videographer, or just someone to show up on your podcast and run his mouth, hit me up.